Duration ~ 14 days
Destination ~ Along the Madigan Line to Birdsville

A Madigan Line crossing is not a trip to be taken lightly; there is no made track. The “Hema” Simpson Desert map makes the sober observation that: “This is a cross-country route with NO TRACK”. Wheel tracks will be discernible, clearly so on many days, but equally there will be many occasions when the wheel tracks will simply disappear. Cross country travel following a “Go To” line on the GPS, over awesomely big dunes, and rough to very rough sand moguls and spinifex clumps is the norm. 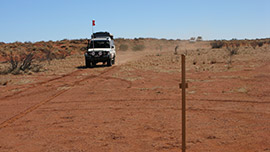 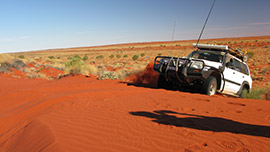 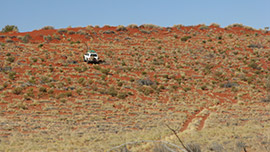 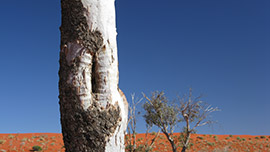 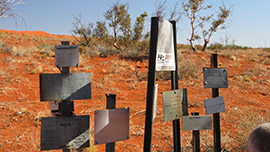 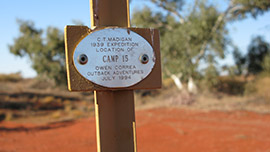 The North Simpson Desert was stunningly beautiful. The intense red desert sand contrasted magnificently with the green, yellow and black vegetation. But the driving was very, very hard.

The dunes were enormous; 30 metres high and more. “Big Red” was a minnow in comparison. It was an awesome feeling to stand on a dune and look across at the next and see little dinky toys crawling up its side. Nearing the top the dinky toy vehicle would try to claw its way over. Sometimes it would succeed, sometimes it wouldn’t. When it didn’t, red sand would fly into the air from four spinning wheels.

The Madigan Line is named after explorer and geologist Cecil Thomas Madigan who, leading a party of nine men made an epic crossing of the North Simpson Desert, by camels, in 1939. The extremely interesting story can be read in Madigan’s book: “Crossing the Dead Heart”.

Madigan took 35 days to make his west/east crossing; we had estimated ours would take 12-14 days. We would travel some 800 kilometres and traverse over 600 sand dunes.

As only half a dozen groups (on average) undertake a Madigan Line crossing each year, and all make the crossing from west to east due to the unbelievably steep eastern sides of the dunes, it is most unlikely that you will meet any other travelers until you get to about Camp 15, which is on the Hay River Track. You must therefore be totally self sufficient, and have in your group a competent mechanic who can also bush weld.

Madigan’s Camp sites were all marked with small plaques on yellow painted star pickets in 1994 by Owen Correa Outback Expeditions. We owe them a serious debt of gratitude.

Camps 1A and 2 are easily located. Camp 1A is the location of the plaque from the original Camp 1. The actual site of Camp 1 is on private property and is inaccessible, so the plaque was moved to somewhere more accessible. Camps 3, 4 and 5 are on aboriginal land. Permits to access them are not being granted.

To gain Camp 6 from Camp 2 you must head south and then east, passing through a tiny section of land at the apex of two triangular areas of Native Title. That point gives access to the Colson Track and then it’s cross country to Camp 6. It’s all clearly shown on the “Hema” map. Most Madigan Line travelers simply go north up the Colson Track and then strike out across country to Camp 6.

At Camp 11, we were not at all surprised to find that we were the first group through that year. The last group had recorded their names in October of the previous year.

When you reach Camp 15 there is a three way intersection: the track north follows the Hay River to Batton Hill and the Plenty Highway. The track south goes to Camp 16 and Madigan’s Blazed Tree.

The blazed tree is still there, quite intact and looking very healthy. Comparing it with a picture in Madigan’s book, it was evident that its size, general shape and vegetation has changed little in the ensuing 70 years, but the blaze has almost completely grown over.

Many travelers have attached plaques to a series of star pickets at Camp 16. Again, there were two old, weather worn ones bearing the “Smith & Co” marks from 1984 and 1985. Clear evidence again of what had been achieved all those years ago.

Camp 16 marks about the furthest east you can proceed on the Madigan Line. Camp 18 is in a Qld. national park. Permits will not be issued for cross-country travel. Camps 18 to 24 are on private pastoral land. Travelers are therefore obliged to continue south down the Hay River Track from Camp 16 and pick up the QAA line to access Birdsville.

At Birdsville ensure you visit the Memorials to Madigan and to Ted Colson which are across the side street from the pub and also visit “Camp 25”, which is on the door between the Bar and the Dining Room in the pub.

N.B.: Due to recent Native Title Determinations a Permit is now required to traverse the Madigan Line. Contact the Central Land Council in Alice Springs on 08 8951 6211 or email permits@clc.org.au