Not so long ago, there was no track and no opportunity for 4WD tourists to even enter the top end of the North Simpson Desert. No oil or gas exploration had ever been undertaken and no grazing had occurred. The whole area remained exactly as it had for thousands of years; an undisturbed, pristine wilderness. During 1998 and 1999, Lindsay Bookie succeeded in opening up a track 200 kilometres south to Madigan’s Camp 15. (Cecil Madigan was the first European to cross the North Simpson Desert). Lindsay’s hard work made the area accessible to responsible 4WD tourists. 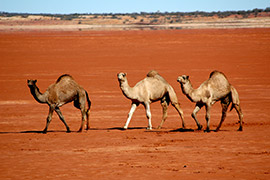 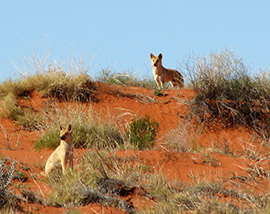 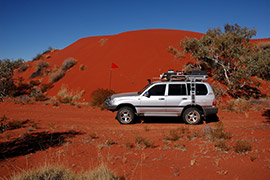 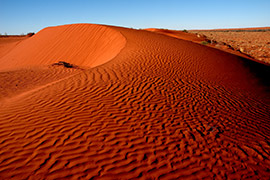 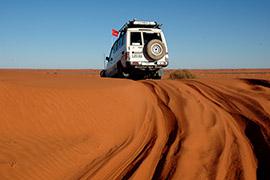 At the end of the K1 Line, we turned onto an old shot line which took us east over rough, but smaller, sparsely vegetated dunes. Their serrated crests were bathed in golden-red light from the slowly setting sun. Gaining the southern end of the Hay River Track very late in the afternoon, we made camp. Next morning, serenaded by a raucous flock of Little Corellas, we visited a small claypan with a steel post and plaque which gives the distance to Poeppell Corner and Batton Hill. This was a critical point to find for earlier travellers as it gave them a precise and clearly defined location. For latter day travellers such as ourselves, it merely confirmed our GPS location.

Heading to Madigan Camp 16 we were stunned by the sheer magnificence of some huge, vibrant red sand dunes. Their colours were unbelievably brilliant. Four members of our party had visited Camp 16 just a year previously during a Madigan Line traverse. Our plaque was still in place, so after the obligatory photos we continued to Madigan Camp 15. Exquisitely coloured desert wildflowers proliferated, and incredibly, two lithe, healthy dingoes simply stood and posed for photos.

The track was becoming easier to traverse now with fewer and smaller dunes. The scenery was changing too. Where it had been classic Australian desert scenery with brilliant red sand dunes, spinifex and typical desert vegetation, it was now arid, inland river scenery. Large stands of gnarled, river red gums and stark, white ghost gums defined the eroded banks of the dry river.

Pushing on we located the wheel tracks leading out to Lake Caroline. Named by explorer Charles Winnecke in 1883, Lake Caroline is a huge, spectacular, pristine claypan about 5 kilometres wide. We made camp near its edge. A small group of feral camels burbled their displeasure at our intrusion on their domain.

Crossing the Tropic of Capricorn next day we made a short detour across the soft, sandy bed of the Hay to a plaque. The plaque was erected in 1999 by Andrew Harper who had set out from the coast of Western Australia to travel 4,640 kilometres by camel, following the Tropic. Eight months later he emptied a bottle of Indian Ocean water into the Pacific.

For us, after just four days travel through some of the most picturesque, pristine and spectacular desert landscape to be found anywhere in Australia, we entered Batton Hill Camp. Batton Hill is situated amongst a glorious stand of ghost gums and offers great camping. There is a bough shed, a BBQ and a rough camp kitchen, a large open fire, flush toilets and very welcome hot showers.

Next day, following an extensive and extremely informative “My Country” Bush Tucker Tour, we drove out to the imposing Goyder’s Pillar to marvel at the glorious sunset colours. It was a fitting finale to a remote desert trip packed full of interest and wonder.

N.B.: You need a Permit to traverse the Hay River Track. Details of how and where to apply can be found on the TLCC website: www.tlcc.com.au click on “Trips” then left menu bar "Track Permits” and then the Northern Territory pdf.