The trip started with a competitive start on the Friday morning with the members of the “Girl’s Club” hightailing it down to Koolandilly to begin the weekend with a splash in the refreshing Wollondilly River. With the weather in the scorching high 30’s, the need for the splash was evident as soon as we stepped out of the car. Over the course of the afternoon, other trip participants proceeded to join us until it was time for a spot of happy hour up at the shed. Not quite content at just cooling our feet in the river, an afternoon jaunt to the local ice-cream shop was needed (make that River Island Retreat) 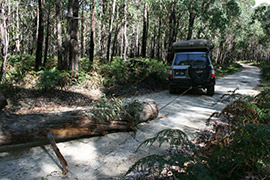 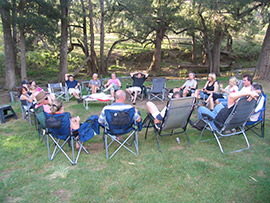 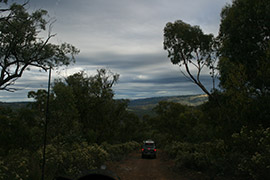 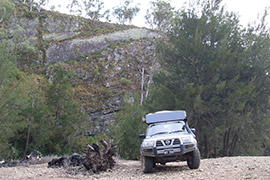 Those of you who know me well will know that I can get a bit excitable … perhaps you don’t even need to know me well? Anyway, when I found out that Bill and Julia were leading another trip, not even one month after I went on their last one – High Country, I was straight on the phone to the members of the “Girls Club” (formerly known as Melina Adattini, Mic Wade, and myself prior to our High Country trip in December/January) - we just had to sign ourselves up to reunite!

Now for those of you familiar with Bill’s whistle from Driver Training, you will know that it used to be a very loud and piercing device used to rally the troops into action. On this trip, it would appear that Bill may have invested in a new whistle as I’m certain it was clearly not as loud as the previous version. The “Girls Club” members (who stayed in “Koolandilly House” overnight) failed to hear it when it was apparently blown just prior to 8:00 am. I’m sticking to this theory - hairdryers being used with inverters and engines running were NOT the culprit of whistle deafness. First fine of the trip was levied our way at the last club meeting for failing to turn up for the trip briefing!

Lunch stop was at the Mount Werong Ranger Station, where several of the group were very interested to read the information in the hut before we continued on a nice leisurely trip to the start of the Abercrombie River National Park, via the more difficult and challenging eastern entrance. It started with an uphill, off camber corner, now affectionately known as “Bill’s tipping corner” due to him needing some assistance from Paul who perched on his sidesteps in an effort to stop him from leaning ever so slightly over. It would seem that Paul is very good at perching, having shown a willingness to do this on several occasions on previous trips. I don’t know how he managed to gain the nickname “macho man”? (You’ll notice I like nicknames!)

At about 1:00 pm we arrived at the Silent Creek camp ground and most of us were happy to make camp and just “chill” for the afternoon. Simon, having only had his new 79 series Landcruiser tabletop for 4 days was still keen to test it out, so he rallied some willing participants for a quick jaunt around the Abercrombie National Park. With him leading, they went off to explore. Apparently Abercrombie is a nice small National Park so, while the rest of us lazily sat about the campsite in the shade enjoying the cool breeze, they were off having a ball swimming at the “beach” and exploring the “sink”.

When they returned, happy hour was on again; just before an evening storm came in to drive us all into an early night. It would seem Simon’s car was so new that he had not even had a chance to kit it out with camping gear, or is that he forgot his camping gear? (I’ve been there Simon and know just how it feels!). He spent the night alternating between the driver’s seat and his reclining chair at the back of the car. Lucky for him, it was a mild night once the storm moved on.

The next morning, Paul and Vicky led the group for a while as the convoy re-traced the explorers’ tracks from the day before. Having led us to The Sink and then The Licking Hole, Paul and Vicki relinquished the lead, and Bill and Julia took us out on the loop road back to the entrance of the park via the very steep downhill. This time culminating with an off camber sharp left turn.

The rest of the journey followed the traditional “New Members” route through Dingo Dell and Jenolan Caves. We had one last detour via the Cox’s River Road before making the trip down the mountain on the actually rather quiet Western Highway.

Once again Bill and Julia put on a lovely trip, with heaps of great company and scenery, I always enjoy myself on their trips!