When Rockets fell from the Sky ...

Written By ~ John and Fran Greig

It had been a very hard and frustrating day; tough on the vehicles and tough on us. We had reached two of a number of GPS locations we wanted to examine and had found nothing. The fruitless search had taken us across forty kilometres of trackless desert sand dunes and spinifex. We were tired, frustrated, and it was getting late, so we decided to call it a day and camp. Jim and Pam went for a wander to find the spot where they would lay out their swags. Suddenly, Jim let out an almighty roar. There at his feet was a ripped apart piece of metal about a metre and a half long and about 20 centimetres wide. It was two skins of stainless steel, hinged longitudinally, with a honeycomb pattern of lighter gauge stainless keeping the skins apart. And by the rainbow hued, brownish stains on it, great heat had been applied. So what was it? Well, it was exactly what we were looking for! It was without question a piece of a crashed rocket!! Eureka!! Jim had done it! Success on our first day, purely by accident. 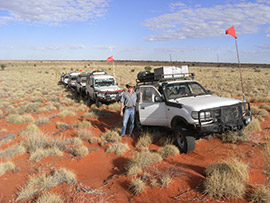 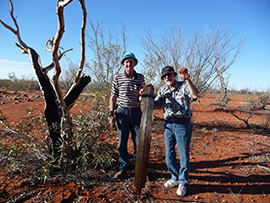 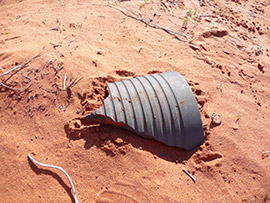 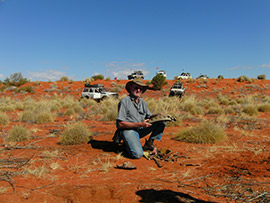 We were on a cattle station east of Alice Springs, with the owner’s permission. The day before Jim’s exciting find, it had taken us most of the afternoon to access the area of the property we wanted to explore via a rough and little used station track which crossed 60 kilometres of sand dunes. It had taken us just on a year of research and planning to get to this point.

Next day, we set off to access another three GPS locations. After 12 kilometres of cross country travel we arrived at the first. My GPS and OziExplorer told us we were within 2 metres of the location. We were parked on top of a dune with Col just one metre away right beside us. Col got out of his vehicle and wandered around to the front of it. Bending down he picked something up from the ground and nonchalantly asked: “What do you reckon this is?” He was holding a piece of silvery grey-black material. On closer examination, it was definitely man-made. It was about two centimetres thick, concave on one side and convex on the other. The concave side was ground perfectly smooth, whilst the convex side was machined with alternating grooves about five millimetres wide. More searching turned up another dozen or so pieces. We also found pieces of grey cement like material, about three millimeters thick, with grooves on one side that mated perfectly with the grooves on the silvery grey-black material.

The location we were at was supposedly the site of a crashed French Coralie rocket motor. So could the material have been some form of insulating material from the rocket motor? That answer turned out to be correct when the material was later identified. The grey cement like material was the fixing agent. Again euphoria gripped us as we celebrated another successful find.

The next location was three kilometres away. It was supposed to be the site of a crashed dummy satellite. Again, we headed off across country. Parked on the side of a dune our GPS’s told us we were right over the location, but a search revealed nothing. So, we spread out on foot and searched in ever increasing circles away from the GPS location.

Walking in the next swale, Col called us over to have a look at some wiring and a sort of instrument he had just found. Searching further we uncovered two similar instruments, and then, bingo!, Col found a complete cluster of about eight of them. Once again euphoria overtook us. We were absolutely elated at our success. This material was later identified as part of the instrumentation of a dummy satellite.

It had been a stunningly successful day, but it was getting late and we needed to camp. Next morning, we broke camp at a leisurely hour, and as this was the last day of our time on the property we headed back to the track we had used to access the area. After traversing it in the reverse direction for about 3 hours, we finally headed off towards Alice Springs.

And that same person might add: “You were also east of Alice Springs; I thought the rocket range headed out over Giles, because at Giles they have a big part of a Blue Streak rocket motor that crashed nearby; how can that be if you found parts east of the Alice”.

Well, the answer is that the Blue Streak rocket motor first stage of the Europa Rocket was the subject of three test firings down the range which runs north west from Woomera, over Giles, and finishes at Talgarno just south of Broome on the Western Australian coast. But the complete Europa Rocket was also the subject of a number of test firings down a second range which runs almost due north from Woomera, across the northern Australian coast, over New Guinea finishing just beyond the Equator. It was down this range that four firings of Europa with dummy upper stages and a dummy satellite were made. This was followed by three more firings with all stages live, with the intention of launching a dummy satellite into orbit. All of those last three firings were unsuccessful. Each of our finds therefore had probably come from one or other of the Europa Rocket launches down that northern range.

The trip had been an unqualified success, thoroughly enjoyed by all of us.